Moist Man by Em Williamson
Sadly, the ectobiology opened a very moist abyss, in which both the moist man and the moister cat spiraled down into the moist chasm. The moist cat became more than moist, he became fluid, stretching out to be larger than a canvas, saving the moist man in the cat's moist embrace.

The house was dark, all the power was out and the walls seemed to absorb the light of the moon; they clicked on a flashlight to see the walls were covered in blood. The bloody yet kawii wolves attacked the faces of the new arrivals. The angler-fish was oh so kawii but it's body was incompatible for the dry room as it usually lives in a rather moist environment. The man holding the flashlight devoured the succulent mauve angler-fish without cooking it, dipping it in blood to add extra flavour. The fish burst out of his stomach, its titan angler-fish form looking like a massive Picasso picture. 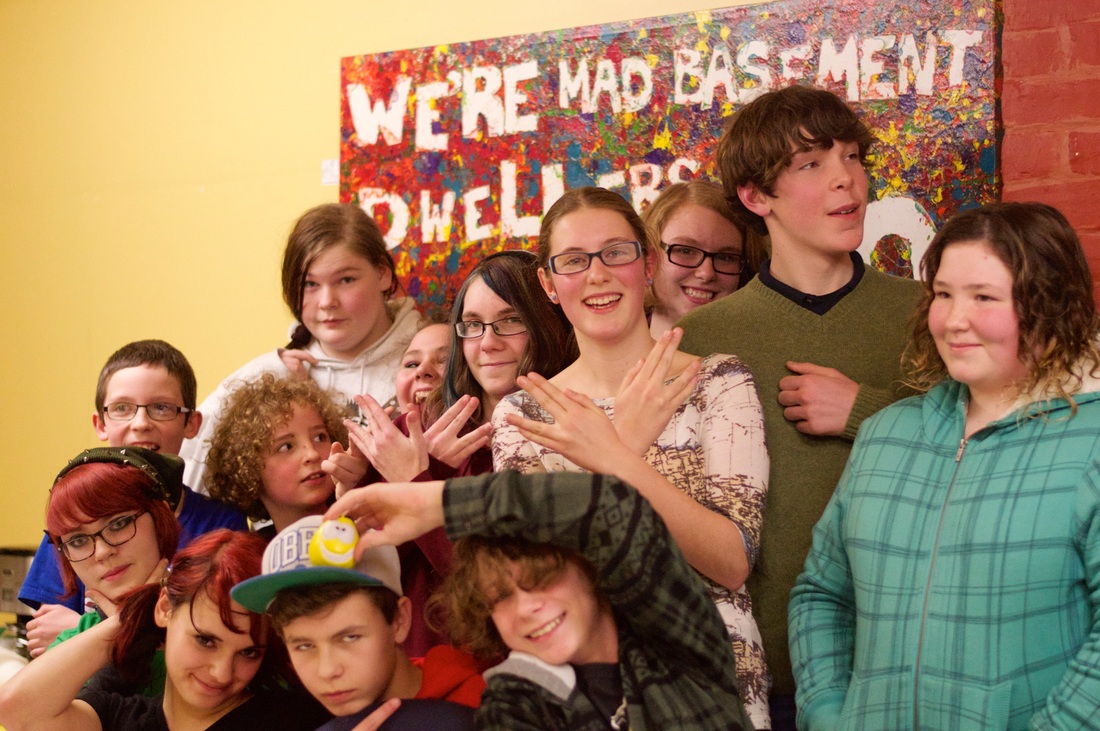 Q: What happens when you combine all the nations of the world and a heavy metal band?
A: Hetallica

Q: What happens when you combine oral hygine and the largest country in the world?
A: Toothbrusia 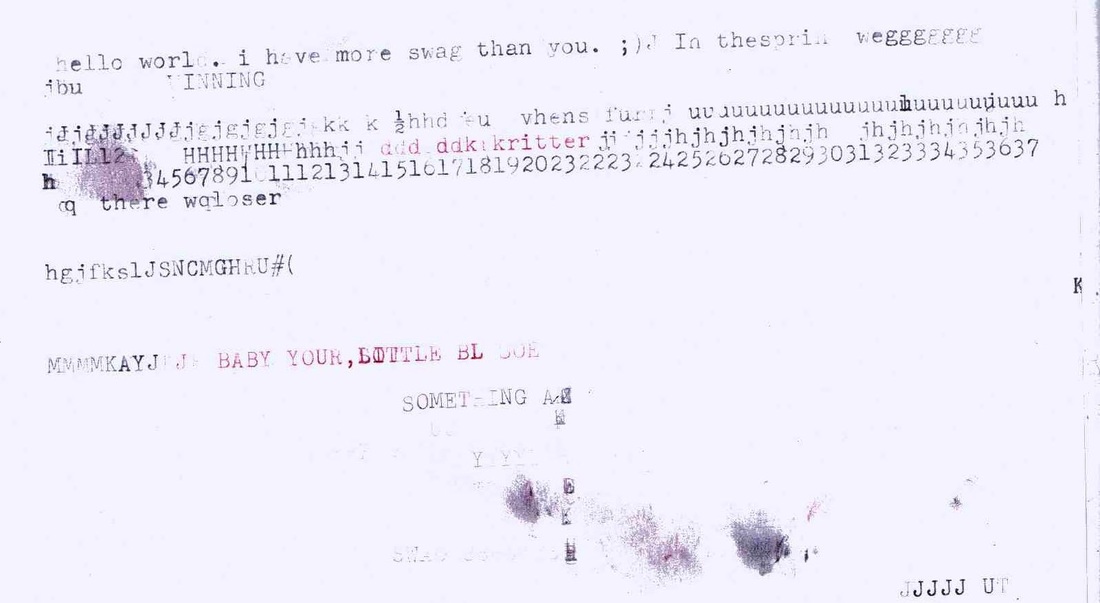 RIO found an old manual typewriter at LOFT 112 . . . and this happened.

This is important, about a cookie
You receive once you've finished
Your meal of rice and chicken
That's what I get anyway.

The fortune
Is the part
That makes it
A FORTUNE cookie. 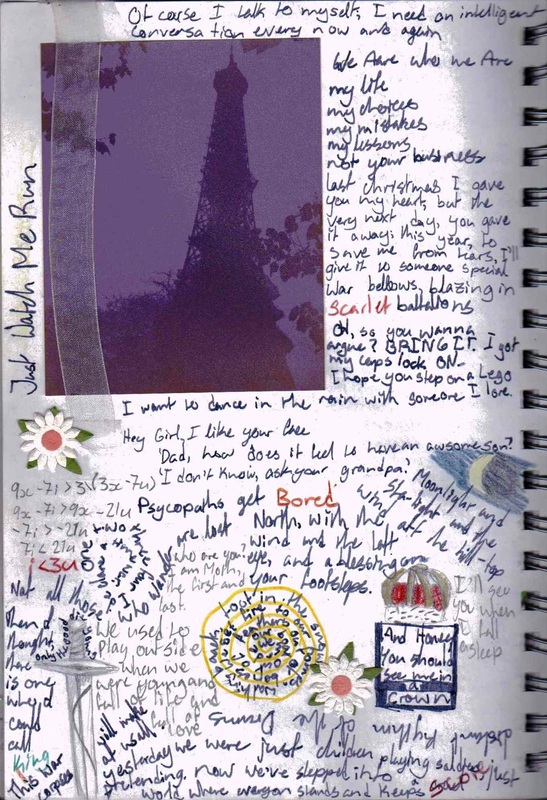 KILL THE PRINCESS by RIO

In a world with too many princesses - they ALL must DIE!!!!
AKA
AWESOME DEATH SCENES
Death #1 by Em Williamson
Once upon a time, there was a princess. The princess was in the process of fighting ten thousand assassins, all of them armed to the teeth (often, literally) with bombs to baseball bats to any other object that starts with a B. But the princess was ready. And the princes fought. Dodging blows, left and right, she twisted and twirled through the massive crowd of large, hairy men, gracefully stabbing each one to death as she passed them. And it was really bad-ass. Finally, sweat dripping down her porcelain cheeks, her perfect ringlets, soaked and clinging to her, the princess shoved her sword daintily straight through the final assassin's heart. Smiling, she tossed her hair back, brushed the dirt off her dress, and began to slip menacingly back to the castle. . . but suddenly, the princess felt a sharp pain in her chest. She buckled, the pain growing worse by the second. She couldn't breathe any more. The princess collapsed onto the ground and all of the dirt she had so painstakingly brushed off was back on all at once. The princess had a heart attack.
Death #2 by Isaac Wilde
Princess Andromeda strode haughtily into the great banquet hall. Around her the guests rose in deference to the High Princess, daughter of King Saur, Lord of Arsunia. She raised her nose into the air, and relinquished not one impossibly important glance from her all-knowing eyes.
Technically, King Saur reigned supreme, but everybody knew that his spoiled daughter held the real power. She walked over to the elevated table at the front of the Great Hall, and sat down at the head of it. The table was positioned so that the ornate drawing of the sun on the humongous double doors behind looked like it was resting upon her head, which only added to her intimidating affect.
When the guests lining the tables saw her sit, they followed suit, uniformly dropping to their pillowed chairs. The princess raised her hand, and servants poured in from the adjacent kitchen, holding aloft covered platters of food, roasted pigs, and even a stag strapped to a stick.
Princess Andromeda motioned for a servant standing behind her to test her food for poison. It was a perfunctory gesture; no mortal would dare poison the great, all powerful Princess Andromeda. The servant selected a bite of each dish on her platter, and when he proclaimed it safe, the princess raised her fork and took a bite. On that signal, everybody else began eating.
Without warning, the sound of metal on stone echoed throughout the hall. Above the Great Table where Princess Andromeda sat, the ceiling began to crumble in a perfect circle around one hole in the stone ceiling, where the tip of a metal staff was just visible.
Another resounding crash was heard throughout the Great Hall, and the ceiling fell in. Four enormous stones hit the Great Table in the center, splitting it in half. The two ends of the table rose into the air as the middle was sunk to the floor by the weight of the stones.
The princess screamed, and bodyguards moved forward as if to protect her, but they never got the chance. A man dropped from the ceiling and landed on the fallen stones in a crouch, the staff he had used to break the ceiling raised threateningly in one hand.
The other hand clutched four throwing stars, which he fanned out menacingly. Then, so fast his black clothes blurred into shadow, he flicked his wrist and the throwing stars embedded themselves in the chest of the four bodyguards. Princess Andromeda screamed in chorus with the rest of the guests, and jumped to her feet and began to run.
The assassin was faster. He rushed up the now slanted table faster than a falcon in a kill spiral, and leaped over the edge, his midnight black cloak flapping in the air. Time seemed to slow as he positioned his staff over his head, the pointed tip getting ever closer to the princess’s pristine throat.
And then the assassin landed, one knee planted on Andromeda’s chest, pushing her down, the other knee resting on the ground and the staff driven clean through her neck and into the ground beneath her. She drew one last shuddering breath, and then slumped to the side, her head at an unnatural angle.
The assassin stood up, roared in triumph, and then drew something from his belt and threw it to the ground. Sulfurous green smoke rose around him, and when it cleared, neither he nor the dead body of Princess Andromeda could be found anywhere.
Death #3 by Willem
Helen walked out of her husband's clay house. She was tired of her annoying bore of a husband. He was damn ugly and had a bad habit of throwing up after eating. She wished something exciting would happen. Suddenly a large bronze statue of a bull appeared in front of her. A ladder emerged from its stomach, stopping in front of her. Having nothing better to do she climbed into the stomach of the bull. The door closed behind her. The sound echoed through the hollow inside of the bull. Suddenly she felt warm and her skin started to turn a reddish colour and her insides boiled. Then she died and the hideous cyclops fed her to their sheep, since she had been roasted to perfection.

Illustration by Willem
Death #4 by Robin Bowering
She died.
Tragically.
Deal with it.
Internet knows she can't.
Death #5 by George Doerkesen
Once upon a time there was a princess. She once went outside and wlked past a swamp. A frog hopped up to her and said in a froggy voice, "An evil witch turned me into this frog! I'm actually a handsome prince. Kiss me and I will return to normal." So she kissed the red and blue frog. The frog said, "Just kidding! I'm the eveil witch and you just kissed a poison dart frog!" And the princess keeled over and fell face first into the swamp.

Illustration by George Doerkesen
Death #6 by Teighan Jones
Once upon a time, Snow White was singing to her birds while sitting outside. The day was warm and sweet, the breeze soft like feathers. Suddenly, she hit a sour note and the birds went mental, deciding that Snow White had it good too long. They began to dive on her, picking out her eyes and flesh, tearing out hair until all that was left was a barren skeleton. The birds made elaborate clothing and sang songs from a long lost language.
Death #7 by Isabella Parkinson
Once upon a time the princess, Dave Strider, was taking a stroll through the timelines when he ran into a hooded figure. Dave decided that talking to the hooded figure would be a great idea. The figure did not talk, only hissed. Only then did Dave realize talking to the figure was a mistake. The figure grabbed Dave's hand and took him towards the dog park. This was the last we ever heard of the beautiful Dave Strider.
Death #8 by Emily Firmston
Once upon a time, a drunk twelve-year-0ld space pirate killed a princess...
Walking down the empty alley's of pyros, and dead drunk, I wobble out onto a main street. The flaming cherry petals fall and burn on the pavement. Loud trumpets sound.
"...the hell?" I mutter, drunkenly.
"All Hail the princess of Jupiter!"
Jupiter? "I hate Jupiter!" I scream, as a parade of minstrels walks by shielding a tall twelve-year-old princess.
She strides over to me and gets up in my face. "What did you say?" she spits.
"Heh," I laugh, drawing my saber. In one  smooth motion, I take off the teen's head. Green blood soaks my clothes and splatters my face. "Serves you right." I walk down the alley I came from.
Death #9 by Rayann Kelly
One day a princess was being her princess self and being a teen putting on make up. She was like . . . "Um, I'm like sooo pretty but this tiara is soooo ugly." So she was cleaning it when she said, "Um, why am I cleaning it?" and flung it on the floor where it bounced into her face and killed her.
Death #10 by Josh Babichuck
Once upon a time there was a princess named Ariel. None of the humans liked her or her deformed mer-maid people. So they went out to murder her. They lured her above water with shiny kitchen utensils and a hot prince. Once she was half above water they jumped out, grabbed her, and brought her to the top of a mountain and threw her off. Sadly, she survived the deadly tumble. Once she reached the bottom, the prince located the body and completed the death by slicing open the stomach of the disgusting ocean dwelling creature. She died later that day of infection and what not.
Death #11 by Alexis Kelly
Once upon a time an innocent princess was doing her princess things such as staring at herself in the mirror and other girly things. As she was fixing her hair she suddenly felt hair around her. She was being choked by G-Shaniqua's  weave! she tried to get the weave off her neck. "Gurl, you better stop touching my weave," G-Shaniqua yelled at the princess. Suddenly she stopped choking. She turned around and G-Shaniqua was dead, Anonymous behind her. "I want to kill her," exclaimed Anonymous, then continued to kill the princes, cutting her in half then pouring lemon juice on her. Fully pleased with what she had done, she smiled and left the princes, now killed.
Death #12 by Olive DiCintio
Mafia Style
Once upon a time, a princess scratched Olivia's new ride. The over gorgeous '58 Plymouth Fury. Olivia came across this scratch later on and immediately gave her Italian uncles a call.
"Hey Mike!"
"What's up, Princess?"
"My car is scratched."
"They're done for. I'll call you later. Ciao, bella."
"Thanks, Mike!"
Three days later the princess was found in a freezer. Not her, so much as pieces of her. She was now transformed into about eighty or so beautifully seasoned Italian meatballs. How could you tell it was her? The meat was sparkly. 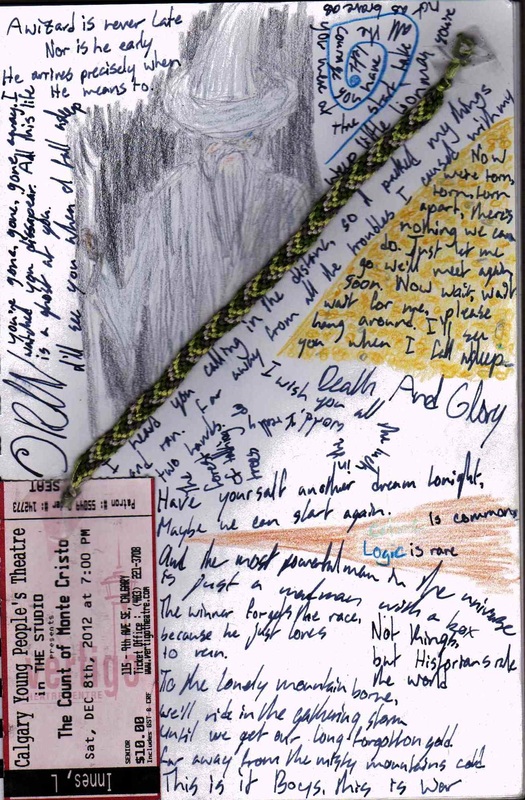 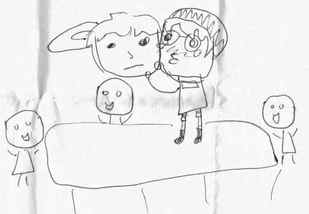 Illustration of making out with the mask, Susan, by Em Williamson