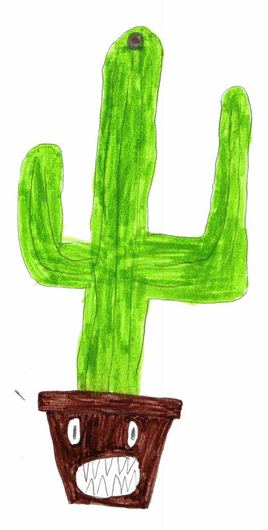 SWEET EATER MIDORI - An anime about a witch in a living food factory on an ill-fated voyage across the ocean.
By Jamie and Neo

On this ill-fated journey
We will survive on this edge
I miss watching anime ...
And reading any manga ...

When will death knock on my door?
While sitting on the blue sky
I glance out to sea
at the raging world before us ...

EPISODE ONE
Midori-San misses and anime episode!
When Midori-San accidentally falls onto a moving ship when riding her broomstick she encounters a pirate that was cursed to be a living plant and is lonely. Midori-San enchants his garden so he will have friends, then realizes that she is missing an anime episode at home. She tries to go home but her broom stick is eaten by a plant, and then she is attacked by another plant!

EPISODE TWO
Midori-San realizes an opportunity!
Midori-San barely escapes the attack by the plant when she is attacked by other pirates who are suddenly eaten by the plants. Her pirate friend and Midori-San are approached by a plant buyer and they turn the garden into a ginormous plant factory that makes lots of money, as people love the plants. Suddenly a demon hunter shows up and attacks! 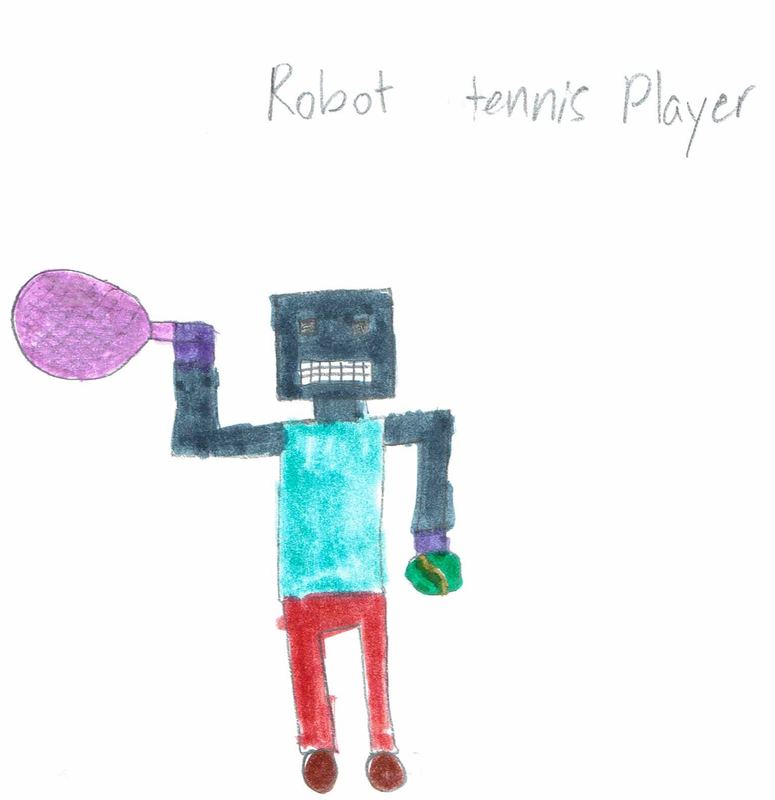 HALF GIRLS GALAXY QUEST - An anime about a kitty cat girl in a futuristic city on an adventure to find the lost treasure.
By Peter and Cleo

THEME SONG - HALF GIRLS GALAXY QUEST
Being a kitty cat girl mascot pays a lot of money
But I want more money
So I'm going to find some treasure
So I can quit my regular boring job
And get a horse pulled cab
and name the horses, Swift and Sparkle
The name of the horses is maybe integral to the plotline
So I go to the futuristic city with its tall buildings
The futuristic city has robots with slinkies
And the slinkies are rainbow and sparkly
So sparkly that your eyes will hurt and perhaps fall out.
And your tongue will sizzle and turn black!
Please do not stare directly at the slinky unless you want to experience symptoms
So I'm moving to the futuristic city, the futuristic city
I'm going to live in a basement of a tall building - Yay!
Which is filled with rats and slugs that scream.
The screams hurt my ears and makes my ears bleed!
So I'm going to find the lost treasure, today!
Or tomorrow.

EPISODE ONE
Feline and G.I. Tank Girl go to the futuristic city and live with screaming slugs and become walking skeletons! They go to find the lost treasure and meet a robot tennis player who joins them. Together they fail to find the treasure

EPISODE TWO
Feline and G.I. Tank Girl spot a screaming slug entering an elevator on the bottom floor. The slug is sparkly and golden. "Wow, that slug is sparkly. I bet he has fallen into some treasure!" exclaims Feline. "We should follow it," Proposes G.I. Tank Girl. They follow the slug. The slug pushes the 1000th floor button. It takes three hours to reach the 1000th floor. The slug enters an apartment. G.I. Tank Girl checks whether the door is locked. It is. Feline bites the doorknob off. Inside is a room with a door and two robot bodyguards armed to the teeth with slinkies. G.I. Tank Girl and Feline shield their eyes and G.I. Tank Girl pesters the robots with various explosives. The robots explode. Our protagonists kick open the door jus tto see the slug hang-gliding out the window with a bag full of gold and silver.
"Dang," sighs G.I. Tank Girl.
"Noooo!" shouts Feline. 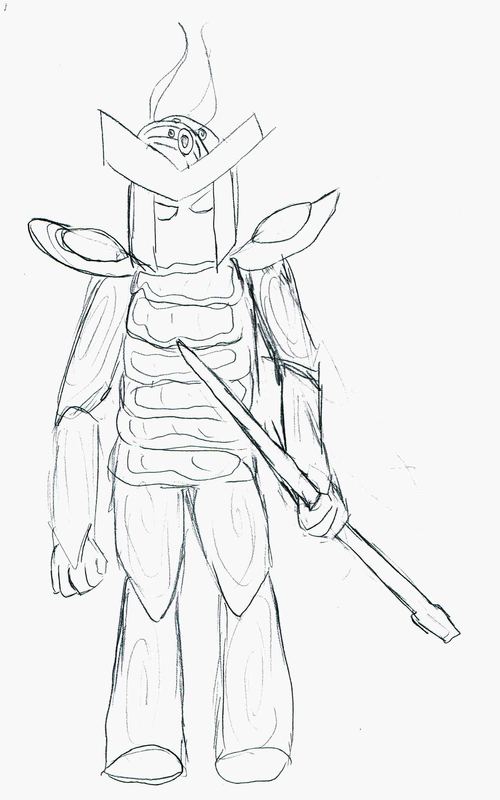 LEGENDARY NOODLE TASK FORCE - An anime about a samurai in a world which makes no sense on a quest to find the truth.
by Emily, George, and Willow

THEME SONG - LEGENDARY NOODLE TASK FORCE
U - U - Udo - n!
I am the great noodle samurai
Who joined the task force
Wind of soup collide
We fight for the hidden truths
In a world that makes no sense
Samrai of Yakisoba and Love
Does truth really exist for me?
Where the hell am I!?
A world of legend and Tataki
I will prevail!

U - U - Udo - n!
I am a big noodle samurai
FREE!
People who joined the task force
FREE!
Soup's wind bumps, so we fight for the hidden truth
In a world that does not make sense
FREE!
Samurai love and noodles. It really real?
FREE!
WHERE?
The legend of the wolrd of Tataki
FREE!
VICTORY!

E2:S1 CAVE OF RABBIT'S BOOK
While the chicken base is flooded, the samurai and monster fighter fly their boat to a nearby cave. Inside is a book that will say where to find the Ultimate Noodle Samurai and founder of the Legendary Noodle Task Force (exposition flashbacks) who was abducted by the giant chickens. They explore the cave, climbing cliffs and jumping over crevasses, etc. In the final chamber they find a jackalope holding another member of the Legendary Noodle Task Force prisoner. The jackalope eats the book and almost dereats the samurai and monster fighter, but the third member, the rock star, does an intense sob, stunning the jakalope. They finish it off and leave the cave to return to the base.

E3:S1 EXPOSITION
When the Task Force returns to their base their defacto commander, De Ninja, explains what happened a few days ago in flashback. Their leader, The Ultimate Noodle Samurai wen tto find the secret weakness of the monsters, however there was an ambush. The leader was taken prisoner and their base was bombed with eggs!

RIO DOES BATTLE OF THE BANDS!

STRESS
My stomach is filled with butterflies
I'm so stressed I feel like I could die
Slowly
I digest my microwaved pizza
My stomach hurts so much I start to cry
Thanks to you, I can do this
I try to pop a balloon but I miss
Juno Awards, better digest this
Worked so hard to get here
Everybody cheer
I almost shed a tear
Here's a toast with butter beer!
(ukulele solo)
THE ROTTEN APPLE REBELS

BETRAYED BY SHOES
Why thy shoe soleth cometh offeth?
That things can turn so abruptly
Thy Chester is Chester, They Chester is thy evil.
Chester through art un maggot of fur
Thake are the things that so many think
but many do not know the true tragedy
Thy tragedy of the shoe and thy Chester
Oui Chester is a furry rat shoe sole stealing giraffe using fool
So they hated him for what he had done onto realize that he had been wrong.
Ashes and pieces but there wasn't much left of the  world anymore.
This was war.

LUCK AND DISASTER
Life seems to be always full of happiness
But often it is hard and unpredictable
Often a day may seem to be a disaster
but at the end it can change to a wonderful experience
Our band started as a small group
But it has grown with time and hard effort
Now we have gained the fame and honor
But I see that there is a price
Today we had another blast
A crazy guy stole Katelyn's pants
It could have been embarrassing
But everybody was just so happy.

SONG 2
AAAAAAAAAAAA
Popular vote, you haven't won
Angered gods from here to the sun, yeah
Shoot a bullet up into your lead
Or I could strangle you instead
Better watch your step
Better keep your grip
Money won't save you, hope you don't slip
Know your place, little man
Know your future, failed plan
Death of a country at your hands

ANIME BAND
I met an Inca princess
who scratched me in the ear
I crawled down the gutter
eating chips in fear
I suppose that I'm lucky
Don't you agree?
I think this cut's infected
Would ya, care to see?

Looking back on things
I've played a lot of games
Cyber-Space flings
Too many names
I'm Prince of Tennis
Call me Goku if you will
I'll name a few things, ro' the mill
Neon Genisis Evangelion
Hitalia, Manga-Mania
Guess what? I'm in a band.

THE VAN WON'T START
Locked out of Jam Space
Fell out of tree
Oh boy, the van won't starting
Gessu we will walku to space
Oh joy, we will walku miles
And it is so collllld and balu
when we got there
The garage, was locked
So we climbed a tree
And we fell down
Into silence.

FALL ON YOUR FACE
Flip yr face
Go join yr gang now
I'm a mad ape
No glum till Friday
I knocked my head and it's a darn riot
Sitting in a tree, you know what I mean
Hang' upside down
What a flippin clown
Falling Falling Falling
Falling, Falling, Falling
Flip your face, Hit your face
go to work, now you hurt
Hide away, dogs at bay
Bandage your flesh, Bag of mesh
Knock on the door, what a bore
Up a tree, know what I mean?
Hangin' upside down
What a flippin clown

Thought you'd always be our food, year eah
They didn't pay us
We sang with lust
Together, we were booted out
And then we souted
"You Effing Scammers!"
And then we bolted out the door