March's E-Zine
Luff is in the air!

The Dragon’s Burning Luff
By Emily Firmston and Emma Train

Drayon, an Ice Clan dragon liked Rayen, a Psychic Dragon – and I mean REALLY liked her. She had glimmering scales, fiery eyes, and was very good at reading people’s minds. But his mom always interfered. Last crush Drayon had, his mom said they weren’t a winning combination and made her leave forever.
But Rayen was a war dragon and he was a tinker. Nobody said that every rank of dragon could be together. He was only a rank twenty three. She was a rank seventy. He was a peasent and she was royalty. He should be bowing to her.
Eventually they broke up, and when Drayon returned to his cave, he found a conjured beast waiting for him.
“Drayon,” it said in a wheedling voice, “come to the top of Warrior Mountain tonight. My master is waiting for you. You shall perish at the light of dawn.” And with that it disappeared. That night, Drayon approached the tower. He slammed through the wooden doors. The beast’s master, a wizard called Majester Vermias, was sitting crossed legged and mumbling spells. Finally she opened her eyes and glared . . .

Lance and His Pet Ants
a romantic poem by RIO

Romance
I lost my pants
Now I can not dance

“Naturally beautiful,” he said to her.
He gave her the roses and backed away from the door. She stared at him a moment, before the tears began to fall from her eyes. He was like a god. It wasn’t fair that she was already dating someone. She didn’t know what to say. She loved him, but couldn’t be with him.
“I . . .  I have a boyfriend, Eric,” she said tearfully, her emotions threatening to spill over.
“Sweet Pea, please listen, I love you. I love you more than anything,” he said, his heart-shattering. “Just dump him. Then we can run away, never looking back. You’re the question, and you’re the answer and I love you more than I love. . . “ He trailed off thinking he would say, “my Xbox.” But that wouldn’t be very romantic.
“Please, Eric. You’ve got to understand, it’s an arranged marriage. I can’t just run away,” said Ally.
He straightened his tie. “Honey,” he said,” you don’t have to conform to anything. You are my one and only. You are my tomorrow and we have a whole ever after in front of us.”
Ally looked away a moment, almost as if having and internal argument with herself. She looked back to him and said. “Eric, I love you so much but we can’t be together, we just can’t.” She stepped away from the door.
“If I can’t be with you, life is not worth living.” And with that he pulled a revolver from his coat. “I love you,” he said, tears welling up in his eyes as he raised the gun to his head.
“No Eric!” Ally screamed, but it was too late, he was gone.
Sobbing, Alley fell to the floor. She picked up the gun. “Goodbye,” she sobbed. She looked at the gun in her hand and with one swift movement, brought it to her head. “This is for you, Eric,” she said, and in seconds, she was gone. 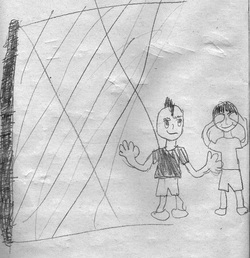 It was the world cup in 2014. England and Germany were pairing off. Renald Gulkendoug of Germany and Alistair McIvor were playing peek-a-boo before the beginning of the match. Then, suddenly, Renald leaned in toward Alistair and planted one right on his lips.
The rest of the team screeched, “Young gay luff!”
Then someone shot the ball at Renald and Alistair, but Alistair’s tongue ring had got caught on Renald’s tongue ring and they were stuck together. They had to be surgically removed.
THE END 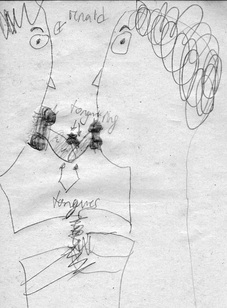 One day Green Lantern met Angelina Jolie in Disney World.
He was wearing a dress made from banana peels.
She was wearing wooden clogs and Adam Lambert’s assortment of leather and black coloured apparel.
He said, “Why does golf involve balls?”
She said, “I dream of dinosaurs.”
It all ended as Green Lantern and Angelina Jolie set off into the sunset on a majestic horse made of robot parts and old nacho cheese packets.

One day Aquaman, blonde hair flowing, blue eyes flashing and wearing a suit of fish scales ran into  Halley-Marie who had long curly blonde hair, bright blue eyes, a petite figure, and light skin. They met on a street corner of a busy city. Aquaman was wearing a black suit with a bright green tie. Halley-Marie was smoking menthol cigarettes and wearing knee high sequined socks and a feather head dress.
Aquaman said, “I hate onions! They are so sad.”
Halley-Marie replied, “I like ginger ale."
Together they cobbled together a new world, talking only in French. They spoke of transformers and toothpicks and they believed they were the best.

Another True Story
By Jacob Rietze

Batman and Steve met on a planet far, far away. Batman was wearing tights. Steve was wearing a tie dyed t-shirt and shorts.
Batman said, “Can you believe that?”
Steve say, “Cool story, Bro!”
Then they were grabbed by a giant space octopus!
Batman yelled, “I’ll save you!”
SMACK
“Ow!” He said as he flew into the atmosphere.