Are you tired of your boring, monotonous life? Do you find yourself thinking “Damn, it’s so unfair that nobody commits arson in my small town!” Well look no further- Reality is Optional Travel Agency is here to help, with our exclusive Mystery Dimension Travel Pack™!
You’ll notice immediately as you step off your train just how… different the Mystery Dimension is- complete with a fully black-and-white colour palette and an incessant mist shrouding everything in an air of… MYSTERY.
Check into your hotel room, be sure to appreciate the complementary magnifying glass and notepad- and remember to check out the drops of blood on the walls and ceiling- fresh from just an hour ago to provide the absolute best atmosphere for your room. The local arsonist also strikes at random nights during the week, so remember to not fall into too deep a sleep.
An essential place to check out on your vacation is the Dead Body Emporium- whose killer you must find out in a predetermined time limit. If you don’t solve it then you get to join the bodies for the next tourists- it’s like an escape room, only… deadlier!
And of course, you must check out the Mystery Cafe- But be sure to choose wisely who you sit with, as there’s a guaranteed 79.9 percent chance that person will murder you during your meal!
In conclusion, the Mystery Dimension is the perfect place for a vacation if you just need a bit more excitement in your life! And for a perfectly reasonable price (non-refundable if you happen to fall deceased during your journey), this could be your next dream trip!

Once there was a cat that dreamed to explore the world. It decided to explore Canada first, it went to all the mountains in Canada. On the last mountain, the cat heard a noise. What was that? The cat was so curious about the noise that it didn't see that there was a hole in front. The cat fell into the hole. The cave was full of statues and there was a door on the other side, the cat opened the door, and then suddenly it was teleported into a jungle. Then, the cat saw a statue of a monkey. Then, in the monkey’s lap, there was the biggest emerald the cat ever saw. The cat reached for the emerald and as soon as the cat took the emerald the beautiful jungle disappeared. And the cat was in a cave and the roof of the cave was falling down! The cat raced to the door. After it was safely in the hole, a staircase appeared, the cat went up the stairs, and then looked at its watch.
​"I WAS GONE FOR 3 HOURS!?," shouted the cat. "That's crazy!"

Last week, I saw the creature in the bathtub. Since the door has stayed locked, my usual tiny, clean habits have been forced to fester and succumb to my fear. My fear- my great fear of bathtubs. My brother, I thought of him. How a bathtub killed him for his religion, that bigot. I sighed, my hands gripping the sword. I was going to get revenge. I hurled myself onto my loyal steed and set off. The wind in my hair and weapon in hand. Crash! My sword clattered to the ground. I tried to get my horse to turn around, but she refused. In fear and panic, I grabbed my emergency dagger and held it before me, daring the beast another step. The end.

The dog was about the chomp the man's head off.
"Ouch!" the dog said. He has been bitten by a four-headed cat.
"You dare step foot into my domain?" challenged the cat, as it glared at the intruder. The kitten whimpered, shrinking into the corner. "Speak up, weakling." The kitten spoke again, loudly. Then, the corner began to speak.
What sounds came from it; I didn't know. I assumed it to be speech. But this was not English or of this world. "Gorble, gorble," it said.
Personally, I don't know what that means.
Perhaps, my uncle, a native gorbler would. The end.

​She was doing her Irish jig until she fell off the hill. As she fell she reached for a tree branch. Now steady, she climbed it until she couldn't anymore and looked over the land. Tears ran like waterfalls down her cheeks, her eyes glistening. She ran as fast as her legs could carry her. Her sorrow too strong and her soul, shattered. Now she could only hope that the pie would waddle back to her on its own. As she waited for her pie to come back, she decided to bake another pie, so that when her pie came back, it would have a friend. Bright red filled, delicious, enticing. He took a deep breath, inhaling the scent of this nice, fresh, warm, cherry pie. Just like how grandma used to make. The end.

He flashed his shins as the ultimate assertion of dominance: hyper-ultra-masculinity. His mother started crying as she watched, appalled. What had become of her son? The son was taken aback. He successfully accomplished his goals, but at what cost? BANG! His pants exploded.
"NOOOOOOO!" he cried, holding the remnants of his clothes in his hands. He held the tatters of his long-gone father's old jacket, just a memory now. Just like him. He remembered the last time he saw his father, when he was six years old, watching a movie he couldn't remember the name of. Neither cartoon nor horror, he knew it would never happen again. The end.

The being starred down, unblinkingly. Hungering. It was evident that he was upset by how long the line at Tim Hortons was- perhaps enough to do despicable things. His mind swims with thoughts of blood, gore, and, of course, coffee. Sweet, sweet coffee. Well, bitter coffee. Coffee is even better than blood. Then again, when you orphan eyes to both, they end up tasting the same. Totally delicious, that's what. I tipped the server on my way out, smiling over the flavour. I tripped and blacked out. The end.

I HATE sticks!!!!! One just broke into my backyard and stared trying to fistfight me! My insincts kicked in as I threw multiple pillows and plates at it. It was so relentless, it miraculously plowed on. The cheese monster was not my friend, despite the old prophesy. As its gooey body moved towards me, I shrank down. Oh, how destiny had forsaken me. The slug crawled onto my unmoving hand. I couldn't scream. I could only stare. The slug inched closer, crawling up my arm, approaching my ear- perhaps to taunt me. To whisper threats? Curiosity turned to terror as it crawled into my fur, sliming. Burning pain shoot through my head. BOOM! My head exploded. That was the end of me, but the beginning for the worm. The end.

T'was the night before Chinese New Year, when all of a sudden, the murder chickens escaped. Nowhere was safe. They could run, jump, fly, anything to get their prey. It certainly wasn't safe to be walking down the street in the middle of the night. But a lack of things to fear in this world leaves few things to fear at night. People's fears are greater at night. Moth's fears are even worse. When I was younger, I used to be so scared of Ovaltime. After all, it killed my brother. I whipped out my dagger and hacked at every available surface, enraged and upset. My brother wasn't going down in vain. The end.

Joey is not here. Stop looking for Joey. What are you doing? I told you to STOP looking for Joey. It's not safe in those woods, especially at night. If you go, no one will look for you. That's why I was standing there, a bag of clothes in hand, powering my phone off.  It was going to be lonely. But anything was better than standing there. Standing there on the stage along with nobody near, this just sucked. I hate it when these live executions get all sappy. Just sharpen the blade beforehand idiot. Stupid idiotic morons.

​My wife's blanket has turned to barbed mesh. I screamed as wire entered by skin. As energy flowed through my body, I screamed with power unheard of. My hand left my guitar, and I breathed heavily as I looked out at the audience. They stood, watching, the anticipation of their judgement swelling in my chest.
"You're a free man, Charlie Brown!" screamed the Judge.
Charlie brown cheered as Snoopy hung his head in the stands. Woodpecker comforted Snoopy, "It's okay, we'll get his next time. He can't run for long. No one can."

​Ocean Hotels (Utopia)
-Hotel situated on a cruise ship in the ocean
-High tech. rooms with literally everything you can think of. Fancy beds, fancy showers, a TV, a wifi network, all of the food you could ever want
-Mealtimes are optional, as food is provided in rooms. But it's good for those who like to socialize with others
-Extremely cheap
-Do not ask how we got the money
-Do not ask about the basement. There is nothing down there
​-For god's sake, please keep the windows shut and the doors locked at night. 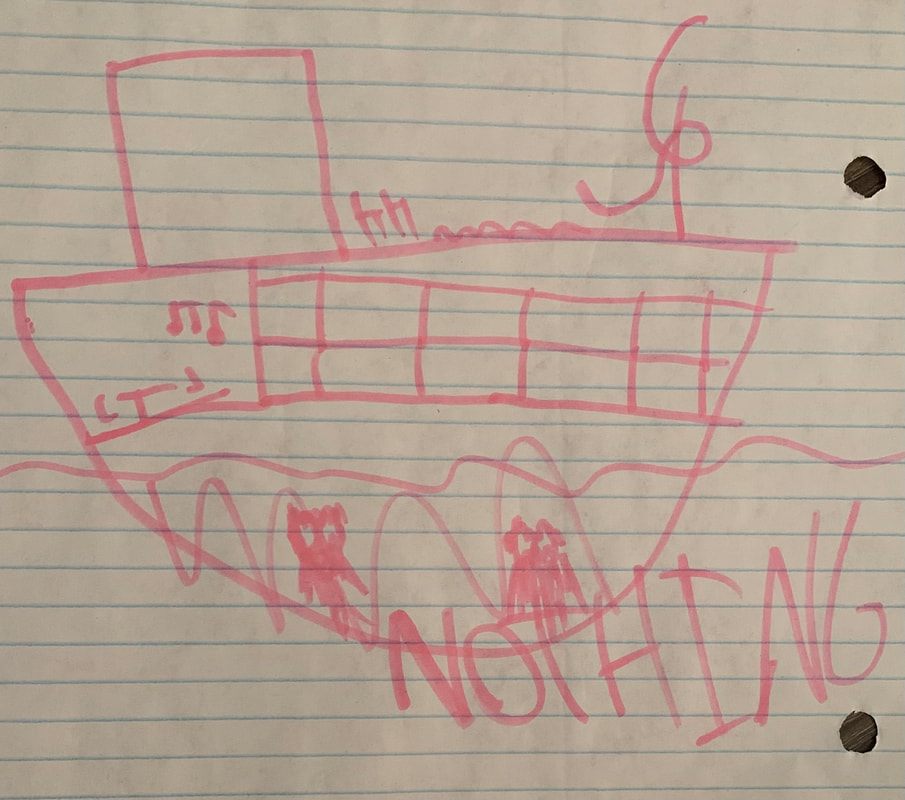 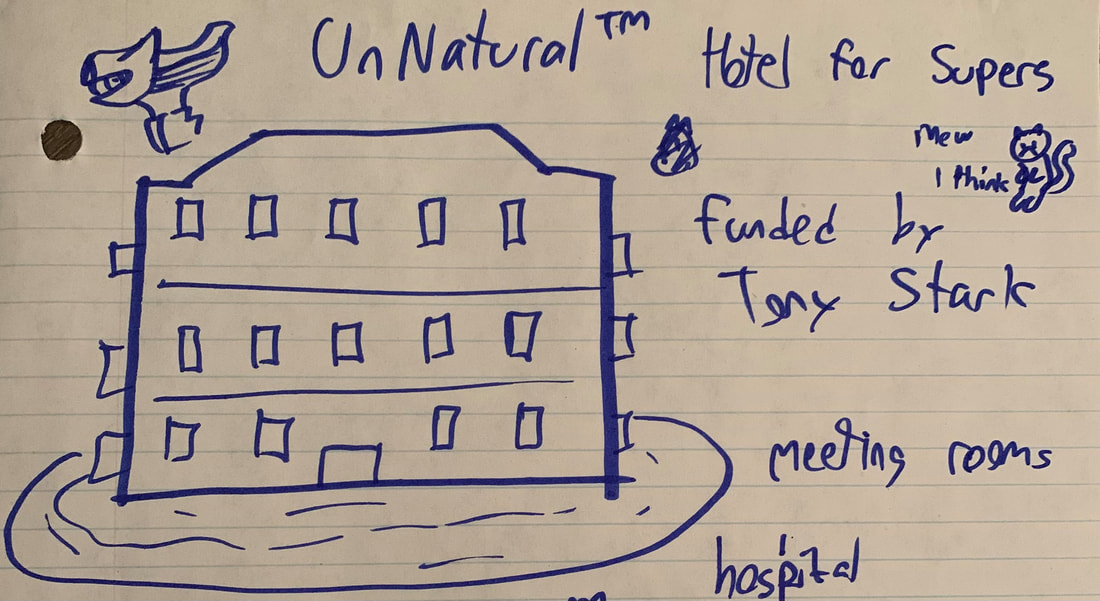 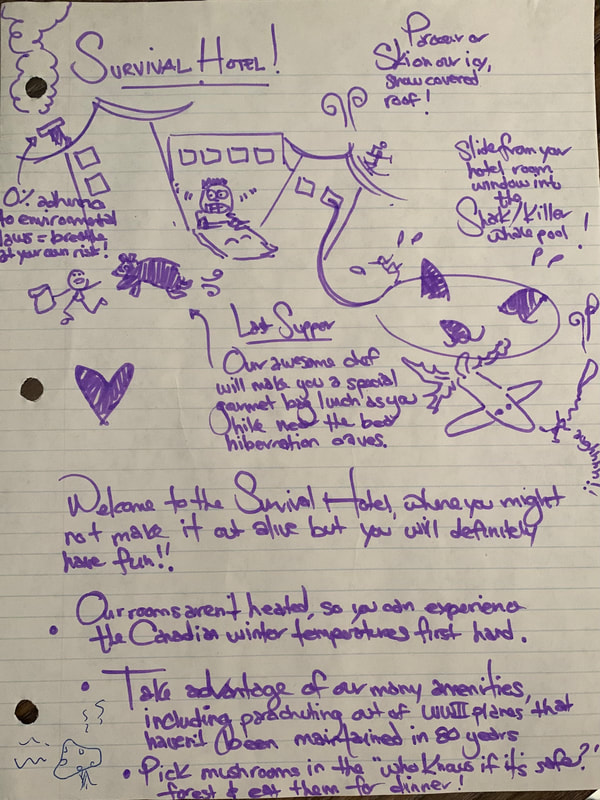 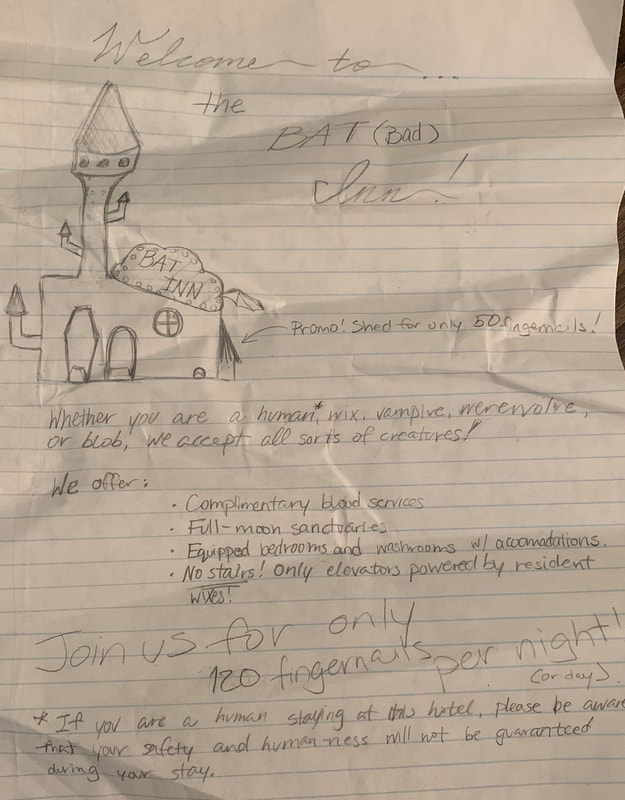 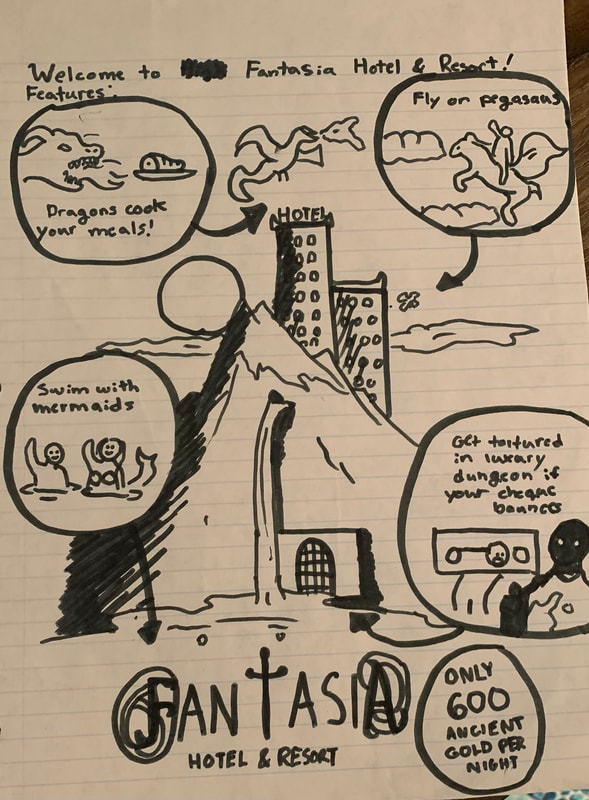